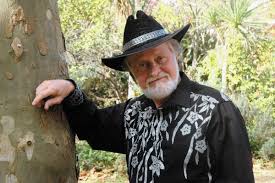 Thomas Albert Berry was born in East London as one of five children. You might ask, who is he??

You will know him as Tommy Dell, the well-known country singer who has been in the music industry for more than fifty years. Tommy has performed all over the country and represented SA twice in the USA at the Country Fanfare Show in Nashville. There he met the famous country artists such as Dolly Parton, Conway Twitty, Crystal Gayle, to name but a few.

He also toured with the Adam Leslie Theatrical Company and worked with e.g. Richard Loring, Eddie Eckstein and Mel Miller.

There is much more to mention but….the news is…that for the first time Tommy is willing to share his story with the public. He won his first singing competition at age 13 and after many interesing twists in his life, made his mark in country music.

In this special show Tommy will share personal highlights, sing songs that he has written as well as songs from other genres.( Very few people know for instance that Tommy had opera training.)

Tommy will be accompanied by Frikkie Marais on keyboard, and will also share photos from his personal collection. This is an opportunity to get to know the man behind Tommy Dell….you can imagine the anecdotes.

Have a look at one of his famous music video’s:- Tommy Dell – Cry to me